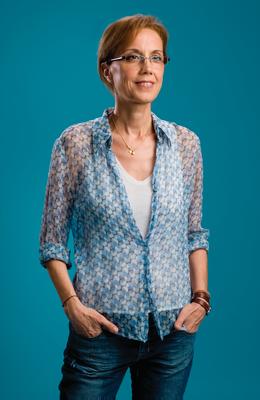 This interview with Anat Talshir, a female Israeli author, is very special for me. Not just because it’s my first interview with a writer from a non-German-speaking country. It’s the first interview, that will be published bilingual (in German and in English) on my blog and I’m very proud of that.

I want to thank Julia Jerosch from the Diana-Verlag for arranging this interview and Markus for the translation.

Katja: Dear Mrs. Talshir, many thanks for getting the opportunity to conduct this interview in advance of the Leipzig book fair.

With „If I Forget Thee“ [German title „Über uns die Nacht“ – above us the night] you wrote a novel that takes place in your home country Israel. This caused for me one thing: I want to concern myself more with the country, read more about it and visit it together with my partner in the near future. Are you happy about such reactions?

Anat Talshir: Yes I am happy for such reactions, but this was not the idea behind this story. I wanted to tell a story focusing on the concept of a couple forced to live on opposite ends of a wall. Behind the wall we can find people, great love, immense emotions and broken hearts.

Katja: What made you decide to tell the story of Elias and Lila? Did you want to generate interest in your country and its history? Draw attention on how the people feel when there are always unrests in your country, your city?

Anat Talshir: In my writing there are no political agendas. I told a universal story about a connection between two people. Things that anyone in this world could experience. This story of Lila and Elias is bigger than life. And if a love story can generate interest in my country, it’s a bonus.

Katja: You always hear that the Arab and Jewish life, especially in Jerusalem, is usually alongside each other. How is the acceptance of your story on both sides, especially in the press?

Anat Talshir: The book will be translated into Arabic and will reach large audiences amongst Arab readers. I can tell you that Arabs that have read the Hebrew edition have responded enthusiastically. Even more meaningful to me than the good literary reviews, are the reactions of people who suddenly found a glimmer of hope that everything is possible. The war separated them, and the war eventually brought them together. Only when you „zoom into“ a story, you can see just how redundant this conflict between Israelis and Arabs really is.

Katja: Who in Israel reads your book the most? Muslims, Jews, Christians? What were the responses so far?

Anat Talshir: The book was a bestseller in Israel. In our society women read more than men. I believe that is was read mainly by Israeli women. However, I have received a letter from a male Muslim doctor who wrote me: „Thank you so much for making me cry“.

Katja: You’re born directly in Jerusalem, so you know with certainty the problems, the fears. How do you deal with the unrests, when they are so commonplace?

Anat Talshir: For as long as I can remember, there have been wars between Israelis and Arabs. Very few days of silence are followed by many days of anxiety and uncertainty. Nevertheless, ever since that day when I was 9 years old in a shelter in bombed Jerusalem, I never lost the desire to live in peace with the Arabs. People can get used to everything, and they find a way to look for hope. Personally, I channel the unrest to a creative path. I have done so as a journalist and I still do so as a writer.

Katja: Before you started writing novels, you have been journalist and presenter, you taught creative writing. Was the way to your own book thus predetermined and clear from the beginning? Is there a big difference between journalistic writing and writing books?

Anat Talshir: The story of Lila and Elias was not written as a result of a rational decision, but out of a deep need to tell it. One of my most admirable authors, Gabriel Garcia Marquez, was a gifted journalist, and he once said: „The novel and the article – are two sons of one mother“. In both cases (Journalism and literature) you need research, historical base, character design and dramatic climax. However in this novel, I didn’t know where the characters could lead me. They have their own personalities in the imaginary world that is occurring in a real place. In journalism the mission is to be emotionally held and loyal to facts. In literature, the author’s imagination and emotion are like fuel to the creative process.

Katja: Is your visit at the Leipzig book fair the first visit here in Germany? What have you got to know about so far? What do you like and what not?

Anat Talshir: I have visited Munich and also several times in Berlin, which is a fabulous, vibrant city. I was very fascinated with Checkpoint Charlie: the separation between east to west Berlin. Just like in Jerusalem, where the wall made it to 19 years, compared to yours that made it to 28.

Katja: Do you take some time for being tourist even when you’re travelling as journalist and author, or isn’t there enough time because the commitments and appointments prevail?

Anat Talshir: Wherever I travel, I always try to explore the city by foot: I will always look for a bakery, a book store and a river. Fortunately for me, the author’s work enables him to observe carefully and mindfully at everything that happens.

Katja: Do you allow your German readers an insight into your office? Where has your book been originated? At your desk? Or is there another special place where you often and much write?

Anat Talshir: The story of Lila and Elias was embedded with me ever since I was a little girl. One of my mother’s friends regularly visited our house. She was beautiful and always on her own. Only when I grew up I realized that she’d been waiting for the man that she loved (an Arab) for 19 years. Only after I left Jerusalem as a grown up and moved to Tel-Aviv, I was able to write this story. It took 3 years, during which I sat in room in old Jaffa, a city where Jews and Arabs have always lived together.

Katja: Will there be another book from your pen? Are there any new projects?

Anat Talshir: I am currently working on two projects: a novel about a successful female criminologist who at the age of 50 goes out to investigate what ruined her parents‘ marriage many years before. The second project: a script for a movie that takes place is Jerusalem.

Katja: And finally a question which I’m particularly interested in as a passionate amateur cook: What is the national dish in Israel? Is there a dish that shouldn’t be missed in an Israeli family? And would you maybe tell me YOUR very special favourite recipe?

Anat Talshir: I myself am also an amateur cook 🙂

Since most Israelis came from all around the world: from Poland and Russia to Turkey, Iraq, Morocco and Yemen, our cuisine is very diverse. In spite of all the differences, you can find in every Israeli home: fresh tomatoes, cucumbers, red onions, parsley, and cilantro – finely chopped, with a side of tahini paste.

I’m happy to share with you a recipe from my novel that my family always looks forward to:

Mix all the ingredients in a bowl, roll palm-sized kebabs, and fry in olive oil. Put the kebabs in a large pot; add tomato sauce, water and spices so the liquids cover the kebabs. Cook for about an hour. Can be served with white rice or sliced challah bread.